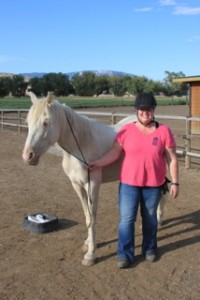 I recently attended an eight day holistic horsemanship course near Cody, Wyoming at the beautiful Dimock Ranch. Taught by a mentor of mine, Anna Twinney of Reach Out to Horses, and a follow-up to many hours of previously completed course work, the curriculum focused on further honing my skills in ROTH’s Trust Based Partnership methodologies.I had the high honor of working for the second time in my career with some spectacular BLM mustangs from herd management areas near Cody.

During my time in Wyoming with five other highly gifted students, two spectacular ROTH instructors, Anna herself and perhaps the best teachers of all in the form of mustangs, I experienced many shifts in thinking, as a horsewoman, a trainer, an instructor and as a person.

As I sat down to write this article I began to mentally “sum up” my experiences.

I became fairly amused as a song by Billy Joel from my teenage years kept surfacing in my thoughts. “A Matter Of Trust”. A line from the song resonates: “You can’t go the distance with too much resistance”

This concept was clearly illustrated during my time spent with April, a 3 year old BLM Mustang from the McCullough Peaks HMA. April is a stunning cremello mare with blue eyes, who was gathered off the range in 2013 and has spent her time at Dimock Ranch. Initially gentled to human touch via ROTH Students last fall, April has received minimal daily handling since then. As my project for the week, I was assigned the task of working with this stoic and sensitive filly on foot and leg handling to ensure positive farrier experiences, and leg stretches for further mobility and desensitization. What we learned together was so much more.

As previously mentioned, I consider wild born mustangs to be amazing teachers of horsemanship. If one is listening or watching “for the whisper” you can tune in to a whole host of information. Untouched and wild born horses give us a pure, undiluted, untainted view into true horse behavior and language.

For my assignment with April, I was to present my progress to the instructors and class on the final day of the course. I was to work mostly on my own time to accomplish my goals. So the first day I made my way out to the large paddock containing several young mustangs to get my horse and get down to business.

Having worked with mustangs previously, I knew that catching them is always an issue, and actually can stubbornly remain an issue for life. Having experience with this and having been briefed on April’s situation, I felt confident I could catch her in a short amount of time. What I had forgotten was the mustang sense of humor and uncanny ability to humble us lowly humans. While she was not at any time running or out of control, April made me work for about 30 minutes to catch her, basically burning a whole session. I’m sure she thought it was a great opportunity to see who I was, and to remind to ASK – not tell – and to go SLOW. I am proud to say I did rise to the occasion by dusting off my rusty mustang “slow is fast” approach and ultimately it worked, as I was able to finally touch her, leading to a conversation that was to last all week.

My take away from first session:

As a horsewoman, I like to ask my horses as much as possible. There are times that “telling” is the only option (dangerous situations etc) however a trust based partnership comes from a give and a take. Asking “Can I touch you here? Do you like that?” Asking allows a voice and opens the floodgates for a lot of valuable information. If we listen, the horses will tell us.

Most domestic horses are very accepting. It is quite easy to get into their space and do a whole lot of things to them. We don’t ask, we just do, starting with the approach in the paddock. We bustle right up to our horses. Maybe they get a greeting, maybe they don’t. We put the halter on and we come in. Is there a hello? Is there a check in? Do we approach in a polite manner? Where are my eyes? How is my body language? How am I communicating? Is it in the language of Equus? It’s easy to forget these simple things in everyday life. April reminded me that if we were to have a trust based relationship, I needed to move slowly, communicate clearly by using proper body language and eye contact, and do a whole lot more asking – down to the simplest things such as “Can I touch your withers?”

As the week went on I worked with April and many other horses, mustangs and domestics, on a variety of things from trailer loading and ground tying to extreme behavior problem solving. My awareness of equine language and learning hit a whole new level from these experiences. However, a theme surfaced with each situation and each horse, reminding me that asking instead of telling whenever possible, opened doors.

During my personal time with April, I worked hard to be extremely mindful of her sensitivity and her appreciation at being asked even the smallest things. The more questions I asked, the more things she agreed to and the resistances faded. We had many “conversations” in which she showed me incredible things such as her ability to learn very quickly by small releases of pressure. I am quite proud to say that by the end of our time together we were able to present to the instructors and class while April was basically at liberty in her paddock with several other young mustangs. I was able to pick up all four feet, do leg stretches, and gently place each foot back in place. All this while April stood quietly with a simple short rope hanging loosely around her neck. At any time she could have easily left my company. To say it was an exhilarating moment is an understatement. 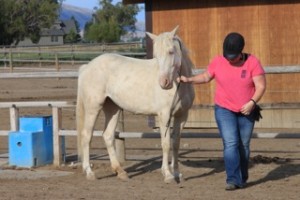 My experience in Cody offered a shift in perspective to be sure. As the days passed I began to ask myself questions about my interactions with others. As a Mother, Wife and Boss, I wondered “Could I be creating more of a partnership? Could I take the communication to the next level? Is the mutual trust in this relationship? How often do I ask permission for simple basic things?”

I invite you to remember that each time you interact with your horse you are, in effect, training him. Take a look at those interactions and ask yourself where your level of trust and partnership is. Can you take it up a notch? Are you asking, or are you telling? To be clear, asking does not mean your horse gets to do whatever he darn well pleases. Asking means just that, asking. “Can you put your foot here? Can I touch you there, or there, or how about there? If you don’t want me to touch you here, can you tolerate here?” You get the point. The big picture is creating a conversation that flows back and forth. You might just find that creating that conversation creates a whole lot of trust.

For more information on go to http://www.spirithorsecenterinc.com 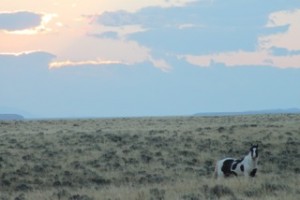 A BLM Mustang Stallion residing at McCullough Peaks herd management area looks on curiously during a visit to the wild herd areas.

Find out what is happening
© Spirit Horse Center Inc.